Such a good time: The Twin Coast Cycle trail

Days before, as we drove from Auckland to Paihia, cocooned from the driving rain in a borrowed SUV, clad in layers of optimism, I’m thinking, so what if we can barely see 1m in front of us?

A two-day cycling mission is massively alluring, isn’t it? As Pythagoras apparently once said “Go not by the most common road but the smaller paths”. As we leave the common State Highway 1 and wind into Paihia, it’s the gloaming and the harbour is glass. There’s a little shower here and there. No big deal. Still and warm-ish by October standards. Our launch pad for the trail – the Bay of Islands town and its surrounds – is a sanctuary from the gloom that swept us up to the Far North.

After a day or so acclimatising (drinking, eating, sight-seeing, fishing) we drive to our accommodation at Ohaeawai – the glorious historic Paheke Lodge – where we leave our luggage and our driver Rob Ueberfeldt, from Top Trail Hire & Tours Ltd, takes us to the half way point of the trail – Kaikohe, about 10 minutes away. The shed where the bikes are is down a side street. There is a dog barking madly, somewhere nearby. There are no people.

There’s a sense of abandonment in Kaikohe, but the trail is going to change that. I hope with every fibre of my being that it does. The project is six years in the making and for those whose livelihoods depend on it, the journey to completion has been as labyrinthine as the trail itself.

We are excited about the unknown. We choose our bikes and set off. Rob’s advice is nicely loose: “Head that way, I’ll see you in Opua.” The track is groomed gravel, like a wide driveway. I am 10 years old again on a brand new bike flying along past forest and farmland. The five of us are united by a collective free spiritedness. My weaknesses are revealed, which is more a reflection on me rather than being any fault of the trail: 1. I freak out having to negotiate narrow passes. 2. I am constantly hungry.

The swing bridge and waterfall near Otiria is breathtaking. In summer it will be an ideal spot for bombs and a picnic. About two hours later, we make it to Kawakawa and order excellent sushi and cold lemonade. Plus a compulsory stop at the the Hundertwasser public loos.

We set off for the final leg to Opua. Along the way are spectacular mangrove swamps and the old coal rail trail that passes through an 80m tunnel. Spookily fun. At Opua, Rob picks us up and drives us back to Pakeha Lodge. We arrive around 3.30pm and head to Ngawha Springs for a soak.

Our bums may be numb but our spirits are high. We set off around 9.30am. A BMX track follows the main cycle trail and we bounce along, laughing like fools, and speed down a big sweeping curve through the forest and up the other side. This leg massively scenic and, like the first day, there are stops in interesting towns … like Okaihau, which means “feast of the winds” – a reference to its setting on a ridge overlooking the upper reaches of the Hokianga Harbour and Waihou Valley. At Okaihau Village cafe we are joined by other cyclists refuelling, but this is about the only time we see anyone else. We are blissfully alone.

Off we go again, following the main road, before heading into oblivion. It’s downhill, mostly, but it gets a little slippery at times. It pays to feel loose and relaxed. The moment I tense, the wheels slide – not in a I-planned-this kind of way. The trail on this final leg to Horeke follows a river and farmland which has been fenced off. There are many gram-able grassy riverside spots for a picnic. 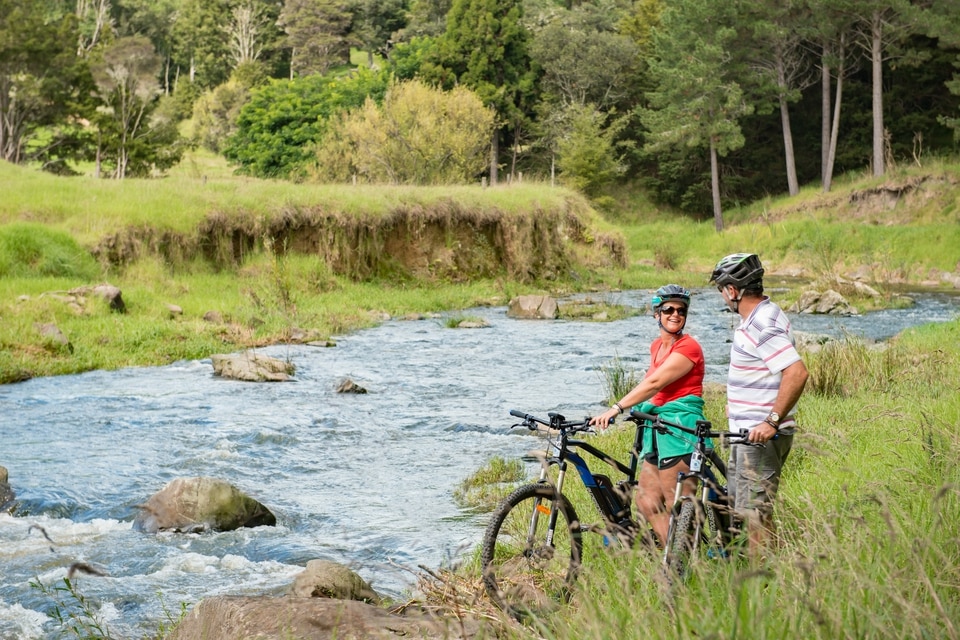 This expedition transcends a mere cycle tour. It’s a fantastic cycling trip, yes. But it’s also about the people we meet along the way, the hospitality, the lime milkshakes, the landscape, the pies, the history. Glimpsing a part of Aotearoa that is as far from contrived and touristy as you could imagine.

HOREKE TAVERN
You must go to Horeke, says a colleague when I tell her we’re doing the Twin Coast Cycle Trail. Horeke, at the top of the Hokianga Harbour, is a place of firsts. It was once called the heart of the Hokianga, being New Zealand’s first commercial ship building yard, dating back to 1826. Cannibal Jack was the first settler, in 1825. The first government-funded hui was held here after the Treaty of Waitangi was signed. First postal service. First murder trial in New Zealand. First pub – the Horeke Tavern. It’s the second oldest town in New Zealand. It’s the final destination on the second day of our arse-numbing cycle adventure.

As we cycle in to the town, and along to the hotel built – like everything here – over the water – there’s a group of beekeepers loading honey into a small truck. One of them hands Chris a jar of honey. Haere mai. 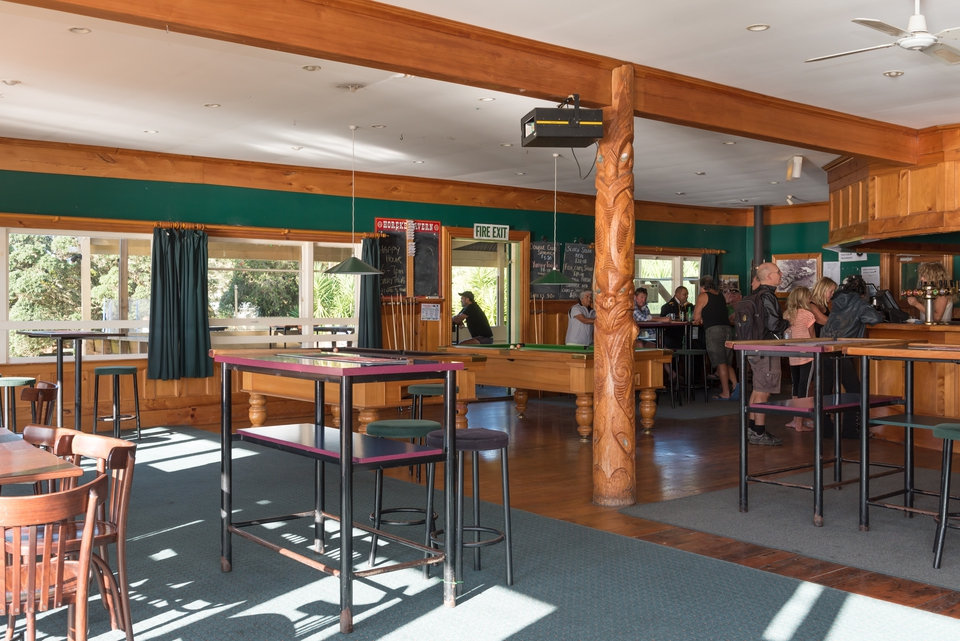 Pete, the publican, pours cold beer from the tap. He used to live in the house next door. When his son was a little boy, he would sit in the kitchen window with a line out, and when he hooked a snapper he haul it straight into the kitchen sink. Pete is restoring the old house and the old pub.

He’s owned the tavern for more than 20 years. “I’ve just held on, wanting, willing for that cycle trail to come.

“We had an 86-year-old German man arrive here on the cycle trail the other day,” says Pete. “But I’m thinking of putting a ban on Lycra at a certain age.”

The grand old hotel has undergone a massive renovation. Upstairs the kids share a two double-bed room, with vast television but better views out across the harbour and we have the downstairs suite. There is a jetty, with a harekeke fringed umbrella and we sip our beer out there while the kids play pool.

The food is prepared with love. Pete gives us the recipe for his chowder – his “signature dish” says his wife, Laurel. Pete cold smokes the fish and adds mussels. It’s heavenly.

“It’s the way pub food has to be,” says Pete. We meet Asa, Brian, Steve and Johnny, who are part of the team putting the glory back into not just the building, but the community which, until the cycle trail was completed, has walked the knife-edge of survival.

Horeke Hotel: fully licensed with its own restaurant, bar, cycle trail services and sumptuous accommodation.
horekehotel.nz Ph: (09) 401 9133
PAHEKE LODGE
A ghost is said to haunt the cellar at Paheke Lodge. But it must be a benevolent spirit because the ambience at this historic mansion is warm and welcoming. It’s luxurious but comfortable and full of interesting books and art. Juen, who owns and runs the place, shows us to our large, elegant rooms. Daisy gets the “Laurel” room which has a huge bed, television, biscuits in a tin, drinks and a glamorous en suite. Freddie and Isaac share the rock-star suite, which was once the stables, where horse-drawn carts full of supplies would pull up. It’s a brand-new yet sensitively designed addition to the 1862 house. 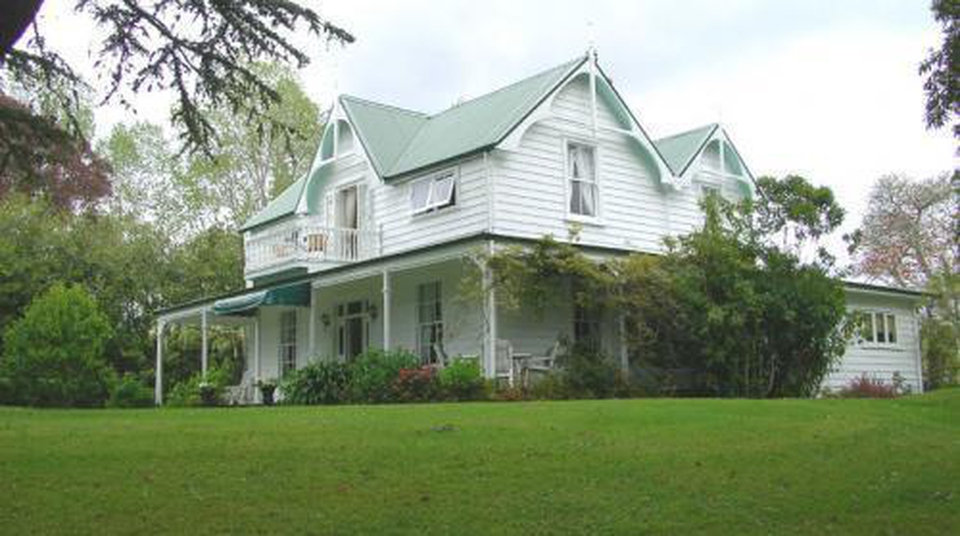 This is a ritzy reward at the end of big day cycling. Juen cooks a feast: an entree of filo-wrapped snapper withe lemon and butter, steak and piles of roast vegetables with all the trimmings, finished by a swoony chocolate mousse. The walls of the main dining room are lined with art, photographs and vast windows look out over the gardens. The table is abundant and resplendent with silver cutlery, candelabra, crystal, and bottles of red and white.

“Work your way in from the outside,” we tell the kids who regard the glistening knives and forks and spoons with curiosity. They are impressed by everything. When they take off after dinner to watch TV in their swanky quarters, we sit and chew the fat with Juen. She is a wonderful host and company. We climb the stairs to the “Cedar” room, which overlooks the old cedar of Lebanon, planted in 1865. The next day, we drive off to Kaikohe for Day 2 of the trail.
paheke.co.nz Ph: (09) 405 9623
PACIFIC BLUE APARTMENTS
The story began in Paihia, in a lofty apartment with multiple storeys and a spa bath. I spend a lot of time standing on the balcony staring at the view. There are a dozen or so people fishing on the rocks near Waitangi Wharf. The crazily verdant Treaty grounds are visible, and so is the flagstaff. I can just see the settlement of Russell, and out to the islands. Some people are swimming close to the shore on the beach over the road. On our first morning, Chris wakes up early and takes the kids fishing. I stay in bed to read and drink tea but I can see them from the window. They get a flounder and two snapper, which we cook on the barbecue.
bluepacific.co.nz/accommodation/
WHAT ELSE
Ngawha Springs
At the end of the first day, we drive for about 15 minutes from Paheke Lodge to the springs at Waiariki. Adults: $2 – this is an experience you simply must not miss.

The therapeutic properties of the pools are perfect for easing your aches. Kuia sit and soak while kids jump from pool to pool like sandflies, too impatient to rest anywhere for too long. Chris dips into The Doctor, which is 44C. By keeping his feet out of the water he says he can tolerate the heat. We take his word for it.
ngawhasprings.co.nz
EXPLORE …
OTEHI BAY
The skipper is the captain of dad jokes. He provides an informative and entertaining running commentary about the outer islands interspersed with an occasional low-level ribbing directed at Australians. We stand at the bow of the Powercat and whoop and holler as the captain navigates the waves.

There’s a big swell so we keep closer to shore and head for Urupukapuka, for a barbecue lunch. Afterwards, we head up the hill at Otehi Bay and take silly photos against the vast blue Pacific Ocean.

Opened in March 2017
Day 1: Kaikohe to Opua – 40km. Grade 1 and 2 – good for beginners and all ages. No surprises.
Day 2: Kaikohe to Horeka – 45km. Grade 1-3 – includes hill climbs and steep downhills.
Bikes – mine is a Sierra Schwinn – brand spanking new.
E-bikes available.
Trail verdict: Our itinerary, using Kaikohe as a launch pad both days, allows for a pretty much gentle downhill experience. It’s just challenging enough to make it interesting but not to feel defeated.
Take: Water, snacks, padded cycle pants, and photos

Put Your Business on the Map